Rahul straight drives a Neesham delivery straight down the ground, it went between non-striker Manish Pandey and the stumps and beat the diving mid-on fielder.

Another half-century for @klrahul11 on this tour 💥 His 8th FIFTY in ODIs. #NZvIND https://t.co/MKzLGfF6zj

OVERS 30.3: OUT! Neesham bangs it in and Iyer manages to edge it short mid-wicket where de Grandhomme dives forward to take the catch. India 162/4

FIFTY! Shreyas Iyer’s great run of form in the ODIs continues. Brings up his 8th ODI half-century off 52 deliverie… https://t.co/2rD4rzmAbZ

OVERS 25.5: FOUR! Iyer edges over a diving keeper Latham to bring up his 8th ODI fifty off 52 balls

Iyer hits a Neesham delivery majestically over the covers for his fifth boundary.

Rahul cuts a Neesham delivery to the left of backward point, poor effort from Southee at the fence

Mitchell Santner has been introduced in the attack

James Neesham has been introduced in the attack

Rahul pulls a Southee delivery to the square leg fence for his second boundary.

Iyer straight drives a Southee delivery down the ground 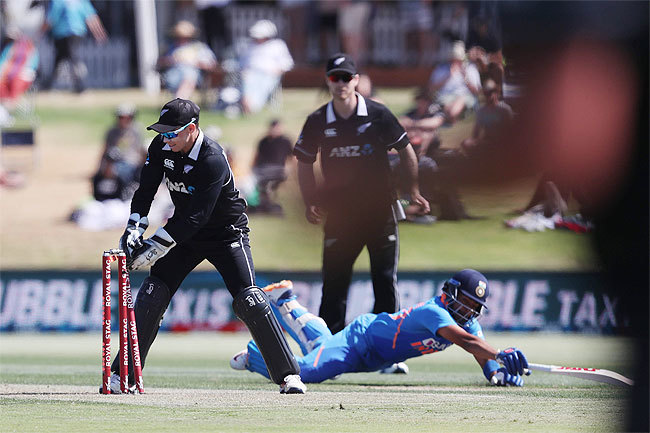 OVERS 12.1: OUT! Shaw (40) flicks a Bennett delivery to fine leg and calls for the second run but fails to beat the throw from de Grandhomme into the hands of Latham who removes the bails in a flash. India 62/3

Colin de Grandhomme has been introduced in the attack

India lose two quick wickets and are 56/2 after the end of 10 overs in the 3rd ODI at Tauranga. #NZvIND https://t.co/A3xD9osX7A

Shreyas Iyer hits a Jamieson delivery over the covers

OVERS 8.6: BIG HIT! Shaw hits over the covers to bring up the 50 for India

Shaw stands tall and cuts through point, fine shot that

OVERS 8.3: BIG HIT! Bennett bangs it in and Shaw pulls over square leg for his first SIX 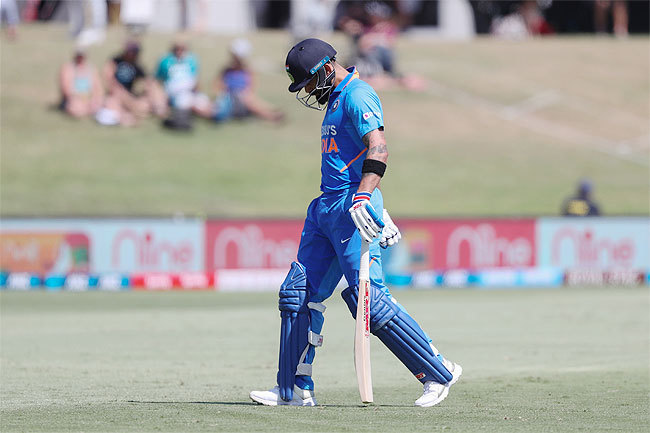 OVERS 6.4: OUT! THE BIG WICKET! Virat Kohli comes down the pitch again but the Bennett delivery climbs on him, Kohli (9) manages it to cut to third man but it went in the air and Kyle Jamieson dives forward to take a good catch. India 32/2

Jamieson bowls it short again and Shaw cuts over backward point for his second boundary.

Virat Kohli takes a couple of steps down the pitch and smashes a Southee delivery over mid-on for a flat SIX. 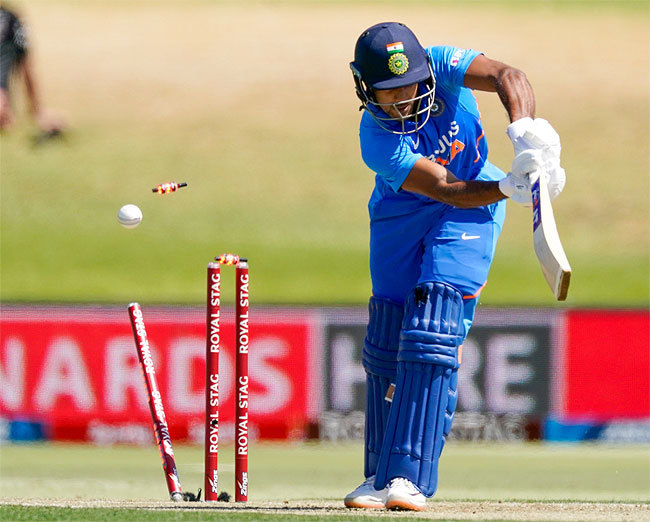 OVER 1.6: OUT! CLEAN BOWLED! Jamieson bowls the full delivery that comes in with the swing and moves away just slightly after pitching to crash into the stumps of Agarwal (1) who plays all over it. India 8/1

Agarwal slashes to third man to get off the mark

Prithvi Shaw and Mayank Agarwal walk out to open the batting for India, Tim Southee bowls the first over for New Zealand

New Zealand skipper Kane Williamson says that it is a new surface and he hopes dew to play a part later on in the game. Tells the fight they showed and put up a fight against a fantastic side like India has been great and they look to continue that in this game. Informs Santner is in for Chapman. Tells it was a balance thing and says it is nice to have the balance back and hence the change.

Indian skipper Virat Kohli says they wanted to bat first anyway. Tells it is a hard surface with some grass on it. Says they have nothing to lose and want to put some runs on the board. Tells it has been a great learning especially with a few debutants. Tells they were outplayed in the first ODI but showed great fight and tells the cricket has been good but also admits he is disappointed to finish on the wrong side. Informs they have one change as Kedar Jadhav goes out and Manish Pandey comes in for him.

A toss win for Kane Williamson in his 150th ODI and we will have a bowl first. A special place for the skipper to b… https://t.co/ZDDDwXx6Oe

A bright and sunny day here in Tauranga for the final ODI game. #NZvIND https://t.co/I0Q0DZj4JE

and Shikhar Dhawan missing due to injuries, Virat Kohli missing out on scoring big and KL Rahul batting later in the order, India’s traditional ODI strength was neutralised without New Zealand having to do any hard work.

Openers Prithvi Shaw and Mayank Agarwal have shown only momentary flashes of brilliance and have not replicated the kind of starts the Indian batting has grown accustomed to from its top-order.

Rohit’s absence has been a major factor in India’s defeat in this series. The opener averaged 57.30 in ODI cricket in the past 12 months, having a major impact on Indian fortunes in this format.

In that light, the burden of scoring runs has been placed squarely on Kohli in this series. With 66 runs in two innings, he did not come through for once and the rest didn’t rise to the occasion either.

All of it resulted in reversal of fortunes on the limited-overs leg of this tour, as India had arrived here at Mt. Maunganui a week ago leading the T20I series by a 4-0 margin. They went on to drub the Black Caps 5-0, but now find themselves in the same position at the same ground.

View all posts by admin →

Translating… There are inevitably more differences than similarities between the current coronavirus COVID-19 epidemic and the outbreak of SARS in 2003, but there are still lessons to be learned. To …

Translating… Kia Sonet is expected to go on sale in August 2020 and it will compete against Maruti Vitara Brezza, Hyundai Venue, Tata Nexon, Mahindra XUV300 and the likes While …